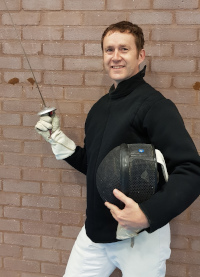 Paul started fencing in 1985 at Kingston University fencing club. He went on to run the club for many years coaching over 100 new fencers each year. He lead the club to team wins in the national polytechnic championships as well as taking the club to compete in international student competitions.

He first joined Kingston Fencing Club in 1986 and participated in domestic and international competitions with foil being his primary weapon.

Having introduced fencing to many people over the years, Paul is keen to encourage new entrants to the sport.

Together with Emmanuel, Paul coaches the Adult and Junior beginners classes. Paul is a Level 1 British Fencing Coach.