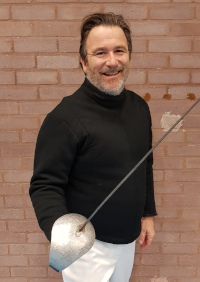 Emmanuel Therond began his fencing career at the age of 10 with the French club SUC-Escrime, under Maître Philippe Nicolas.

He has been on both the domestic and international fencing circuit and is still competing as a Veteran, his primary weapon being sabre.

Having had the chance to travel the world as a petroleum engineer, Emmanuel has fenced internationally including France, Mauritania, Kuwait, Denmark, Norway, the United States and now Great Britain.

Emmanuel, together with Paul Netherwood coaches the Adult and Junior beginners classes. He is also the club manager, club secretary and sabre captain of the Kingston Fencing Club. Emmanuel is a Level 1 British Fencing Coach.